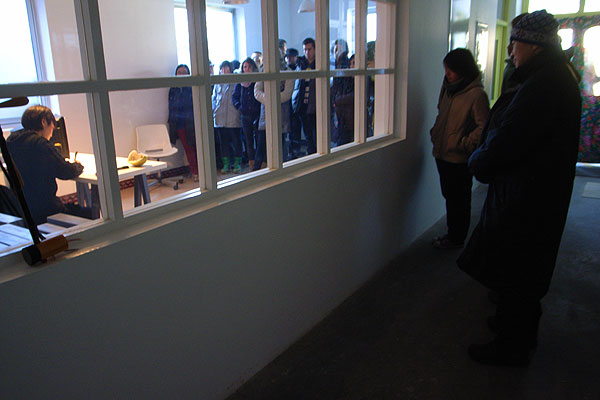 Performance, 16min. Jan 2011. at Homeshop.
Give subtitles to an adult video according to one of my dreams in 2008: Test Tube Boy and Fragile Glass

Olivier and I were living in a so-called high-grade apartment in Paris, which actually looked like a relocated community of China, dirty, simple and crude. Out of the apartment window, it was a second-hand market where many Arabians selling second-hand furniture and some Chinese supermarkets selling food from the 1960s. I got no idea who gave me a great-looking grey-colored plastic pistol, which has a return and a play keys on it. When I was still wondering what was wrong with the pistol, it began to tell a story of its past owner. On the screen there was a young boy (mixed-blood) riding a bicycle across the place where I lived in my childhood. He killed a middle-aged man with the pistol. In the following shot, he was prostituting in the dark, giving a man blowjob with lots of sweat, and then another… poor boy. In the end he was still killed and his pistol was given to me. It was not a toy, but what should I do with it? Then I though I could just sell it. I met another young man in the second-hand market, who was selling second-hand watches. He showed me a lot of watches with all styles, from modern style to designed style and also vintage ones. He said these were watches once belonged to Hegel and Lu Xun. From those dusty watches, I found that Nietzsche and Tagore used the same type of minima-designed black watch. I doubted that if he was just a cheater. At that moment, this guy told me that in fact he was a test tube and also a writer. He showed me the book he wrote, full of false sentimentality. I only remembered the last sentence: in our times there are a lot of people living on sending Cokes. They were named “Coca Cola men”. Coca Cola men enriched this economic society and accelerated its death. When I read this, he suddenly changed into a straight test tube.I cleared my mind after waking up. Here is my conclusion: Pistol =  camera, boys = glass, knowledge of scholars = bitches of time, Coke = Test tube, Me = second-handed.